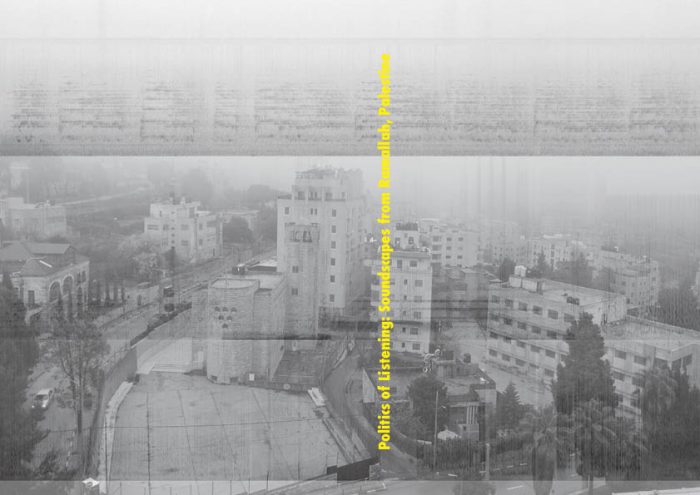 In the two 20-minute episodes of my soundpaper, I will try to talk about and approach the politics of listening using as examples soundscapes from Ramallah in Palestine.

My soundpaper is based on my research on the politics of listening and on my audio work “Soundscapes from Ramallah, Palestine.” A research that started by chance when I organized together with prof. Nathalie Singer a workshop about listening in Ramallah, in the frame of the festival Radionists by the Goethe-Institute, which and ended up as a 51-minute audio piece. In the piece, processed and raw field recordings, together with interviews by people who are living or once lived in the city of Ramallah, were composed together into a hybrid between radio feature and soundscape composition. Thus, in this soundpaper I am trying to describe and define what are the politics of listening, what is a soundscape, how it can constitute speech, how someone can interpret a soundscape, and what are the possibilities of a practice like that in the end.

In order to do so, inevitably I face the discourse about the difference of hearing and listening, the connotation of Muslim prayer in the soundscape of Arabic cities, the sound of the border and how a border is being defined, the sound of bombs and bullets, and the sound of the curfew where relative silence and loudness are shifting their meanings. The unified, naturally well-tuned, detailed Arabic night soundscape of the city is being interrupted by a car crossing the border and its noisy sound. A voice by an Israeli soldier signifies the slit on the landscape of the area. The dynamic soundscape of the border, which I recorded and composed with the privilege of a traveller, works as a passage to the soundscape of a crisis, the recent past where earwitnesses, Palestinians living or having lived in Ramallah, narrate the imprint of this specific soundscape in their memory.

In the soundpaper, I am trying to explain why a soundscape of a city is not just a sonic environment, but the dynamic imprint and an evidence of the social and political daily changes of our world and the way we listen to it. By acknowledging the politics of listening, it could possibly be a way to redefine our view on power structures and who and what is being heard.

Eleftherios Krysalis completed his Bachelor’s degree in Art History and Theory at the Athens School of Fine Arts and his M.F.A in Media Arts and Design at Bauhaus-University, Weimar, on the chair of experimental radio and electroacoustic music. From 2018 until 2020, he was a DAAD scholarship holder. His master thesis was on the topics of Politics of Listening: Soundscapes from Ramallah, Palestine. He currently has a teaching position at Bauhaus-University, Weimar. His work consists of experimental radio formats and electroacoustic musical elements.